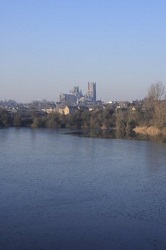 The complex of Roswell Pits was excavated to provide clay for the construction and repair of flood banks along the Fenland rivers.

Workings in the Pits date back to the 17th century and continued until the late 20th century, although there is evidence that clay and stone were dug long before that time.

The oldest and largest of these pits is the ‘Sailing Club’, eastern, Pit. As recently as 1913 the clay was dug by hand and taken by wheelbarrow to waiting wooden ‘lighters’ to be transported to the river banks. At least 100 barges operated during the busiest times. Some idea of the amount of clay taken away can be gained from the fact that the site of the western Pit was previously known as Roswell Hill!

The area around Roswell Pits lies on the northern outcrop of Kimmeridge clay which begins in Dorset. During the excavations skeletal remains of reptiles were found. This outcrop has yielded one of the most diverse number of fossil reptiles, including crocodiles, turtles, ichthyosaurs, sauropod dinosaurs and a complete skeleton of a plesiosaur, as well as ammonites and smaller fossils. Many of these can be seen in the Sedgewick Museum, Cambridge.

Within the clay are a series of soft rocks known locally as ‘gault stones’ which, when cracked open, reveal crystals of calcite.

In 1984, Roswell Pits were designated as a Site of Special Scientific Interest, (SSSI), for their geological importance.

For many decades the Pits have been enjoyed by local people as a recreational facility and they continue to provide access to sailing and angling and a peaceful environment for walkers and nature lovers. Ely Sailing Club was formed in 1946.

In 2006 the largest Pit was sold and local people became concerned when clearance work began around the Pit. Trees were felled, trenches dug and utilities installed. Ely Wildspace, (EWS), was formed - formerly LCPRE - to represent these concerns.

EWS raised funds to pay for a barrister’s opinion which was used to support East Cambs District Council in bringing an Enforcement Notice on the owner. Following an unsuccessful appeal by the owner there has been no further development on the Pit.

EWS also provided evidence to support Natural England in extending SSSI status to include wintering and breeding birds. This has ensured a greater level of protection from future development.

Tern rafts were installed by EWS in 2013, which provide a safe nesting site for Common Terns – summer migrants to UK from Africa. The tern rafts were purchased with a grant to EWS from the Cadbury Bradbury Charitable Trust and manufactured by local company K & K Mouldings.

By 2015, Common Terns were breeding on the rafts and they have returned every year since. With the support of the Environment Agency EWS volunteers maintain and clear the rafts.

Roswell Pits support many breeding birds including the great crested grebe, tufted duck and kingfisher and provides foraging and resting areas during winter for other birds such as the bittern. With a wide variety of habitats many other species are found here: water voles, otters, a number of bat species, dragonflies and many plants including the bee orchid and giant horsetail. 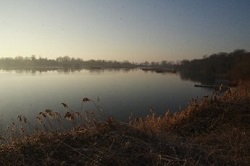 You can hear more about Ely’s Wild Spaces at Memories of Ely Pits and Meadows.

Click on the links below to find out more about Ely's wild spaces and how to get involved.

Get Involved: We are running events all through the year.